Iowa State gets their first true test at home after playing the two toughest teams so far on the road.  Kansas does a lot of things well and getting a victory may be extremely difficult but I don't think ISU should go into the game feeling like it has no shot.  They will need to probably play like they did in the second half against UNLV and if they come out with a first half effort KU will roll.

However there are a lot of potential areas that ISU could attack in this game.

Kansas is #11 in rushing offense among Big 12 teams so it may allow ISU to play the run a bit more in this game.  After facing Jarvis, Greene, and Frank the Tank in the last three games a team that averages 119 YPG has to be a welcome sight.  Pressuring Reesing is very difficult because he gets the ball out of his hands so quickly - in 19 games as a starter he's only been sacked 31 times.  This KU offense is still plenty capable of hanging some huge numbers on ISU but they are a little more one dimensional than last season.

The KU rush defense is very stout only allowing 94 YPG but the pass defense is #8 in the Big 12.  At the risk of reading too much into the second half of the UNLV game, Arnaud really seemed to find himself as a passer in those final moments.  Hopefully he gained some confidence last week because he looked outstanding in the second half.  Hopefully Bass can also continue to contribute at a high level after seeing some of his first extended action during the UNLV game.

Reesing and the passing attack for KU has been out of this world so far this year as he has over 1400 yards passing and 11 TD's already.  Meier and Briscoe (5 TD's) have been very solid for them and they will be very tough to defend.  The return of McDowell and Leonard Johnson should help bolster what I think is the best and deepest unit on the team, the cornerbacks.  Obviously I don't think stopping KU's passing attack is feasible but I think if they can continue to force some turnovers like they have been (they are still #1 in the Big 12) and a pass rush would be helpful.  Kansas also returns some injured players that should shore up their defense.

Obviously this will be an extremely tough Big 12 opener for Iowa State but I'll remain hopeful until the final buzzer.  Winning this game would do a lot to help the program (Just as KU beating ISU in 2005 helped propel the KU program) and it would be great to return the favor.  Hopefully Chizik can repeat the halftime speech at UNLV before the KU game kicks off. 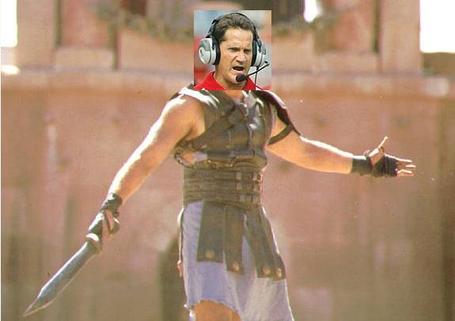