I was not able to participate, but Corn Nation, Bring On The Cats, Rock M Nation, and I Am The 12th Man. Participated.

1. Other than Texas most likely winning the South, and Baylor likely going o-fer in the conference, there's a lot of uncertainty with teams jockeying for position in the Big 12.  As the teams head into this 3 or 4 game stretch, what concerns do you have about your team?  What would be considered a good season, and what would be considered a bad season? If you've already decided it's a good season or bad season regardless of what happens down the stretch, what's the storyline you're looking for as we head into the final month of the regular season?

While Corn Nation and Rock M Nation want the North, A&M wants to get to and win a bowl game, Bring On The Cats is mostly worried about right now:

All I really care about right now is beating KU. I would say that with five wins against a much more difficult schedule than we had in 2008, with a clear improvement in the play on the field, we already can say conclusively that it has been a good season, even if we go 0-3 in November. Everything from here is just gravy, baby.

Given that, the big storyline is this: Can Snyder go 3-0 against Kansas, Missouri and Nebraska after three years of Ron Prince going 0-3 against them? These three games sort of define the season -- everything until now has proceeded roughly as foreseen, at least as far as win-loss record is concerned. Maybe not the Lousiana game, and certainly not the margins of loss (Texas Tech and Oklahoma) or victory (Texas A&M), but we're about where I thought we could be. I had KU and Mizzou as toss-ups in August. Now we get to see what we're really made of.

2. We haven't had a chance to talk a lot of about of the individual players. Some have performed as expected, others have had breakout seasons, while others haven't had the greatest season in 2009. By now, you're probably seen a handful of other Big 12 teams play. Pick one player on each side of the ball from another Big 12 team that you've been the most impressed with, and what about them has caught your attention.

Missouri's Danario Alexander has caught my eye throughout the season after a couple of injury plagued seasons.  He's got the complete package; he's got great hands, great size, and great speed.  Whenever he catches the ball, it has the potential to become highlight reel material.  He's a sure early-round NFL draft pick in my book.  I had to stop and think about a defensive player, but I'm going to go with Missouri's Sean Weatherspoon.  He's definitely the leader of the Missouri defense.  He even looks tough in his Snuggie. 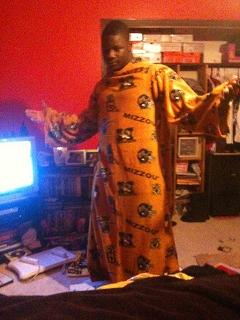 3. What is your take on the Big 12 TV situation? It seems like every week, we have at least one Big 12 game that gets zero TV coverage, while many games are on stations that not every cable company/satellite carrier picks up (like Fox College Sports and Versus).  As a Big 12 fan, do you think a change of some sort is needed, or are you happy with the coverage? Does it hurt the Big 12 that not every game is televised?

Rock M Nation doesn't think it's all that bad:

Sure, I'd love to have every game televised, even if it meant the use of "ESPN Plus" as a de facto Big 12 Network like the conference does for basketball. Of course, this all presumes that an actual Big 12 Network isn't coming down the pipeline some time soon.

I am still a big proponent of the Big 12 getting their own television network up and running. There really is no excuse for not having every single Big 12 game televised, similar to the situation the Big Televen and the SEC has. A Big 12 Network would pay for itself during football season alone, when they replay the previous Saturday's games. Right now, schools still have the option of using PPV to show their games, but when you have athletic directors of questionable intelligence like Bill Byrne deciding not to show the games, I think the fans deserve better. Having a separate Big 12 Network would ensure all games are shown, and for those of us who are college football junkies, being able to watch every game for every conference team would be perfect.

I think the more exposure your conference can get on television, the better it is for your conference. If it were up to me, Big 12 games would be televised in every single television market in the country, and all the islands in the Pacific, too. I want every single child to be able to recognize and identify the Texas A&M block A&M logo, and getting out games televised everywhere would help accomplish that goal.

And Corn Nation has an interesting argument as to why things may not be so bad:

Fox College Sports is probably the worst deal of all; as far as I know, it's only available via satellite sports packages.  Those games might as well not be televised for all practical purposes.  But I actually like the Versus package.  Even with DirecTV being complete morons for dropping Versus, Versus still appears in 20 million more homes than the Big Ten Network, NFL Network, or ESPNU.  When you consider that FSN frequently pre-empts Big XII games for baseball (in September) and the NHL and NBA in many markets outside of Big XII territory, the Big XII could do far worse.  I don't know what the solution is, but unless the Big XII can talk TBS to come back to carry the Big XII, I'd stick with Versus.  And no, when you consider how poorly the Big Ten and NFL Networks are doing in households, the last thing the Big XII should do is consider starting their own network.  (Some might argue that's what Fox College Sports is...)

4. Let's say you had a friend that's been living under a rock the past few months, and they want to know how your team's season has gone. You only want to spend a few minutes on it, you don't want to get into the game-by-game details, so you decide to play the song that best describes your team's season thus far. What song are you playing?

Bring On The Cats: "Tubthumper", Chumbawamba

5.  Power Rank the teams! If you find it too difficult, or don't want to participate, rank the teams based on your projected Bowl Selection Order (just make sure you designate what you are doing. Also keep in mind that K-State is the only team in the conference with 2 FCS wins, so they need to get to 7 in order to be bowl eligible)

I think the top 5 in the South are better than any of the teams in the North.

Thanks again to all that participated!