The results are in: With the 6th pick from the Big 12 Conference, the Insight Bowl has taken the Iowa State Cyclones (over Mizzou and Texas A&M) to play in the 2009 Insight Bowl in Tempe, AZ on New Year's Eve. The Cyclones hold a 1-0 record in the Insight, and will be matched up against the Minnesota Golden Gophers from the Big Ten.

December, 2000. The U.S. Supreme Court had just given George W. Bush the presidency, The Thong Song was in heavy rotation on MTV airwaves, and Iowa State had one more chance to win a bowl game before the conclusion of  20th Century. And on a cool Phoenix night, Iowa State defeated Pitt 37-29  become the second-to-last major conference team to win a bowl game. 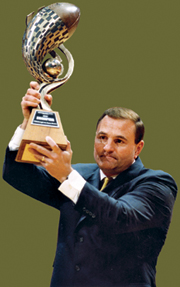 This is the closest Coach Mac ever came to smiling.

The Insight Bowl started life as the Copper Bowl in 1989, and is now played at Sun Devil stadium in Tempe, AZ. The title sponsor since 1996, Insight Enterprises, is an IT software and hardware solutions company based out of Tempe. The game will be broadcast on the NFL Network at 5:00 pm (CST), so plan your New Years' Eve destination with that in mind. The bowl game picked Iowa State over both Mizzou and Texas A&M, citing the fact that the last time the Cyclones came to town, they sold 20,000 tickets, an Insight Bowl record.

As for our opponents, the Minnesota Golden Gophers, well, what can we say that history hasn't already said? They were on the losing end of the biggest comeback in Division 1 post-season history. They once allowed Iowa to steal their goalposts. And then, of course, there was the 1923 incident:

In the third quarter, while attempting to tackle a University of Minnesota ball carrier by throwing a roll block, Trice was trampled by three Minnesota players. On October 8, 1923, Trice died from hemorrhaged lungs and internal bleeding as a result of the injuries sustained during the game.

That's right folks. Jack Trice, the man for whom our football stadium is named, was trampled to death.
BY GOPHERS.

(Not that this is anything really new for the Gophers. That Bronze Pig that Iowa and Minnesota fight over? It started because Minnesota was still taking cheap shots at black players well into the 1930s.)

So while the Gophers will inevitably point to the 22-2-1 record that they hold in this series, remember that they have only met 3 times since 1924. Because they decided to kill one of our players. All three of their national titles came before the Eisenhower administration. Their coach suffers from Motivational Tourette's. And on December 31, they will be trying to avoid their 3rd Insight Bowl loss in 4 years.