The story here was the fact we could score. CU had no answer for Brackins as he scored 26 points in 22 minutes. Lucca, Petey, Boozer, and Vanderbeken all had a good day shooting.

As you can see, the difference in the game was in the first half. Did ISU play stellar D? Not exactly, but we played them into their weaknesses. CU did a good job of dribble-penetrating, setting up open jumpers. ISU would collapse and put 2-3 guys on the guy driving, allowing for wide open shots. Fortunately, CU went 4 of 23 in the first half including 0 for 9 from 3. I'd have to think 7 of those 9 were uncontested. When you are able to shoot over 50% in a half, and the other team is shooting 17-18%, you're going to get a big lead.

Not really much to add. It was fun to see the team establish such a big lead that the game is out of reach by the half. Our guys have been playing much harder the past several games and they got a much deserved win.  Hopefully they can carry this over into getting a few more wins down the stretch.... We'll see...

[Note by CrossCyed, 02/12/09 12:56 AM CST ] I wish I could have seen this game (curse you Iowa State University and your night classes!). I predicted a few games back that our "best" total game of the year would come against CU in a game I would not be able to attend. Anywho, check out this gloriousness:

Pretty, huh? The game was essentially totally out of reach by just after the first TV timeout in the second half.

In other news, Sean Haluska has 32 fouls on the year, against 19 made field goals.

Also, to heck with freeing Lucca. Free Wes Eikmeier! He logged just 3 minutes tonight in blowout action, and his minutes have steadily decreased.

Who cares if he's having trouble adjusting to the Big 12? His defense may not be the greatest, and his shot may be off as of late, as well as turnover issues, but I want to use my new acronym..... 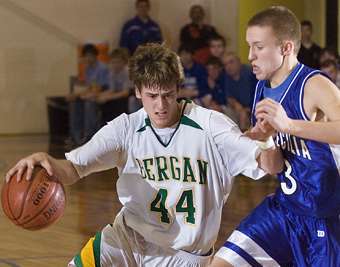 via www.journalstar.com, because it's hard to find one of him playing here.