A Look at Harrison Barnes (and Doug McDermott)

Share All sharing options for: A Look at Harrison Barnes (and Doug McDermott) 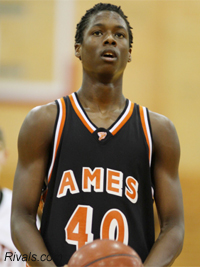 So tonight, I made the journey to Ames High School to witness the man, the myth, the legend.....Harrison Barnes. The Ames High player is the #4 recruit in the nation according to Rivals (and ranked #1 at small forward). He contributed 17 points in Ames' 73-46 win over Des Moines Lincoln in a substate semifinal. He made seven field goals, including one three pointer and a few rim-rattling dunks.

Evaluating a big time recruit was something new for me. I came in expecting the #4 recruit in the nation to wow me. While his dunks exceeded most of what I've seen in high school, I can't say he looked like a guy that would looks like the world is his....at least not yet.

Whether it's a product of the solid Ames High team, or the fact that he just doesn't need to, it didn't appear that Barnes was giving 100% effort tonight. I'm guess it's a bit of both, but it's hard to judge a top prospect playing against a team like Des Moines Lincoln with an 8-13 record.

Barnes was the best player on the court, but Ames hardly needed him to win easily tonight. While he got a good chunk of minutes, he didn't play near the entire game. He had numerous baskets from waiting under the hoop....something that you can do when you're 6-6 and playing high school ball in central Iowa.

Barnes is very smooth with the ball in his hands. He seemed comfortable both bringing the ball up the court and working with it in the post. But he impressed me the most with his ability to pass. His passes were crisp and usually found his teammates in a position to score.

Barnes has a good looking shot from behind the arc, if not maybe just a little flat. He didn't have to test out much of a mid range or post game tonight, as most of his points came via the dunk. His rebounding skill was also not seriously tested by Des Moines Lincoln. His defense  appeared strong, and he came up with a couple of steals, but Lincoln also did their best to avoid him.

Did Barnes look like a top recruit? Maybe not #4 in the nation, but you can tell he's oozing with potential as a junior. Unfortunately, his performance was an "easy" 17 points that didn't require him to show off. I was also surprised that he did not appear physically big quite yet, but he also looks like he can continue to grow into his body. Obviously another year of high school, to be followed by a college weight training program could make him that much better.

Barnes is obviously a prize jewel in the 2010 recruiting class for schools like Iowa State, North Carolina, Duke and Kansas. Tubby Smith was in attendance at tonight's game. Whether or not he picks Iowa State is anyone's guess.

I also got the chance to watch Doug McDermott, son of Iowa State coach Greg McDermott. While Doug did not start for Ames High, he ended with 14 points and eight rebounds in a workmanlike effort. He gave pretty good effort on the floor, and showed the ability to work both in the post and behind the arc. He was also quite vocal on the floor. Not quite sure if he looks like a Big 12 recruit quite yet, but wouldn't be disappointed to see him walk on. He appears to have good touch for a big man that just needs to be matched by size and physicality.