Share All sharing options for: Rivals, Hatred, and Stereotypes: Mailbag!

A couple of weeks ago, I received an unsolicited e-mail from a young man named Tyler Hissey. It goes as follows:

My name is Tyler Hissey. I'm doing some research on sports taunting and the kind of things that make a specific fanbase tick.

As the Big 12 bloggers of SB Nation, I would greatly appreciate if you could answer the following questions about the program you cover and its fan base.

So, after seeing that Corn Nation broke the silence and respond to the questions,  I've decided to follow suit in my pursuit to help Tyler out!

What team do you cover for SB Nation?

WTF? Dude, come on man. You got my e-mail address from CloneChronicles. You acknowledged that I was a Big 12 blogger. My screen name is mplscyclone. Just follow the clues Tyler. I'm not going to spell it out for you, geez.

(See the rest of the answers on the next page)

Who do you consider to be your team's biggest rivalry?

The entire world, universe, and God. Gene Chizik too...

If you go around campus in early September, however, you may hear about a little known school called the University of Iowa. See, they have this mascot called Herky that wears a mascot head on the top, but  an otherwise human outfit on the bottom! He's a bird head with a human body! Those people in Iowa City can't get ANYTHING right. 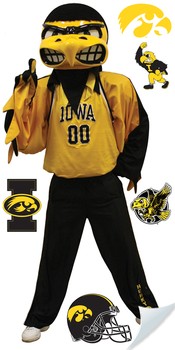 Anyhow, if you talk to your typical Hawkeye fan, they will say it's not a rivalry. They'll say something like "See 'dem Hawks ova thera, dey be winnin' more than ya'll. Dey be done put da wippin's on yous 'Clones I mean CLOWNS ha ha ha!" So, at first it's hard to figure out what they're actually saying. Then you realize what they are trying to get at is how it's not really a rivalry because there needs to be some back and forth.

They will go on and talk about the time period where the Hawks beat the Cyclones 15 years in a row, from 1983 to 1997. What they will reglect is that over the past 11 years, it's been 7-4 in favor of the Cyclones. See, illogical people will do that. They'll point to an irrelevant time period to try to back up something that applies now.

You see, they've had some good teams where if they had just beat ISU, they would've gone farther. They cannot admit that, because people here in Iowa believe they are an elite team (funniest thing ever). In order to be elite, they need to crush "little brother" ISU. It's obvious the Big 10 is so bad that one of the worst teams in the Big 12 can beat a top tier Big 10 team, but they cannot admit it.  I believe it's a character flaw that develops after doing too much meth, but I don't know for sure. I've only lived in Iowa for 7 years.

What teams and specific players do  casual or die-hard fans of your team hate most?

Us fans hate all the teams, but our definition of hate is more of a dislike. ISU fans are typically willing to tip their hat to the other team. In my opinion, the hate we may have for other teams is typically rooted in their fans and those in the Big 12 North.

If you wanted to taunt players from your conference, who would be the biggest targets?

Tyler, we like to go after the coaches. Stuff like Mangino hitting the buffet too hard, Bill Synder is snaggle-tooth, etc. You see, it's easier to single them out, and there's a better chance they'll hear us. In basketball, it's funny to see Doc Sadler or Frank Martin flip out.

We typically save the taunting for the coaches of the teams, as they get paid to take the flack, and often times they will be around longer. A lot of us non-students realize the players are 18-22 year old kids and typically lay off, unless they do something unsportsmanlike.

Only players I can remember ISU fans taunting are basketball players. Guys like Maric from Nebraska, Pierre Pierce from Iowa, but other than Pierce most of the booing is from the fan section. You get more taunting often times in basketball due to pauses like free throw shooting, where the students are sitting under the basket, and the guy is out there all on their own.

What kind of taunts would sting the casual fan of your team the most—going after the make-up of the fan base, individual players, coach, school, or the state?

I would say going after the fan base, followed by individual players. I would say all of the Big 12 schools tend to be in states that get some flack for the state they are in, so you don't hear too much of "Iowa sucks, Nebraska is awesome" but I'm sure it sometimes happens.

In 100 words or less, best describe your team's fan base

The most loyal fans in the Nation. If ISU had a fanbase like most teams in the Nation, we'd have attendance similar to Baylor's. Last year in football, we won 2 games. The last game of the year was something like 20 degrees, and the place was almost sold out. How many schools are going to have that kind of turnout in a bad year, in super cold weather?

In basketball, we've been pretty bad the last several years, but we typically rank in the top 25 in the nation for attendance. For whatever reason, ISU fans are enternally optomistic and will always believe better days are ahead.

What are the common stereotypes associated with your team's fan base and the school in general? In what ways are they true/false?

There aren't really a lot of sterotypes. If you survey fans in other conferences, they don't typically have a ton bad to say about Iowa State. We typically just get crap for not being good, and in the past few years, we haven't. I'd say that Ames is one of the best places at least in the Big 12 North to tailgate. We may not be the greatest at football, but we know how to have a good time.

Look at this quote from Corn Nation:

Nebraskans are generally football geeks. We tend to be more knowledgeable about the actual game of football than most other fans, which is why you don't see massive amounts of tailgating at Husker games. We tend to taunt others less than they taunt us, although that tends to even out if we happen to be drinking. Or in my case, breathing.

WTF is this? You are too smart to tailgate? Serious? You live in a state where there is NOTHING going on. You have a bunch of fields and shit, tailgate it up! Are you sure you don't tailgate, because the people there are just boring and lame?

We live in a state where there are 2 more things going on than Nebraska, and we live it up! Of course you do need some heavy drinking to get through all of the sorrows and dissapointments we've endured.

Cyclone fans, feel free to comment below. Help set me straight and get Tyler the answers that he needs!