I actually made a writeup on this too. Bad timing! Read my take after the jump. - CrossCyed

The scouting report on him from ESPN is that although the guy isn't an athletic freak, he's just a solid, skilled player who projects at the college level. He has post moves, and is a 3 point shooting threat. An interesting part of the report is it says he needs to work on his conditioning, that he may never be more than a 25 minutes/game guy, needs to work on his defense and rebounding. I guess we will see how that all pans out.

Nevertheless, this is a guy that Fred took the lead on recruiting, it's pretty clear he was a priority for the 2012 class. The program needs post depth.

Below are a few YouTube videos of Niang... Actually, they are videos of the whole team, but they make it clear who Niang is, with the exception of the last video. The last one, he's #35 in the white. 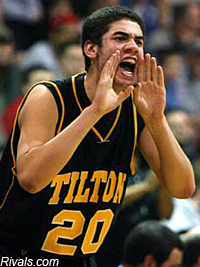 MADE MY COLLEGE DECISION COMITTED TO IOWA STATE THANK YOU TO ALL MY FRIENDS AND FAMILY FOR HELPING ME THROUGH THIS PROCESS #CYCLONENATION - Georges Niang, via Twitter

News rapidly spread around Cyclone message boards and Twitter today that Iowa State men's basketball coach Fred Hoiberg finally got one of his targets - 2012 PF Georges Niang from the Tilton School in New Hampshire. While the pickup of a 6-7 forward - rated as a three star by Rivals - may not seem like a huge commitment, it does represent Hoiberg getting in on a guy early and closing the deal.

Niang's recruitment continues an interesting trend of Hoiberg being very involved in recruiting. From all indications, Hoiberg was the point man on Niang's recruitment. While Matt Abdelmassih will continue to be a go-to guy, especially in the Northeast, it still confirms the fact that Hoiberg is still the main selling point for all recruits. NBA, NBA, N-B-A.

In terms of the actual commitment, Niang fills a bit of the void left by Calvin Godfrey, a void that will hopefully be mitigated by Percy Gibson as well. While Niang is not exactly in the same mold (more of a shooter, less of a banger), he represents more of a diverse threat. At this point, Hoiberg reportedly views him as a hybrid 4 - which conjures up images of Stevie Johnson for me - but what I think means is he'll be utilized both down low and moving out from the post.

Niang committed to Iowa State over Seton Hall, Providence, Iowa, Miami, Texas A&M, Maryland and Alabama. BCS-level interest was certainly there. One thing is for certain, though. Niang legitimately looks to be a hard commit to the Cyclones, and should be counted on to be on campus in Fall 2012.

The focus for Hoiberg at this point is to try and finish up 2011 recruiting, hopefully with Gibson. There are two open scholarships for the upcoming season, and an additional scholarship for 2012. The targets for 2012 include forwards Daniel Dingle and Negus Webster-Chan, and guards Nkereuwem Okoro, Kale Abrahamson, Mike Gessel and Ray Lee.