-bumped for obvious reasons. It's tough to tell the size of the new board supports until you check out how tiny the workers look next to them. This new scoreboard will be obnoxious, and it is completely awesome. CC

Iowa State began building the gigantic new videoboard in the North endzone of Jack Trice stadium this month, and it looks impressive. The support structure is even more massive then envisioned, and you can follow progress on a webcam here; it’s as much fun as watching a crane erecting girders can be.

But Jamie Pollard and Paul Rhoads have plans to improve this stat in 2011. Not by blitzing more or playing zone after the opponent crosses the 20. No, Iowa State is literally going to crush the other team once they enter the red zone. As you can see in the picture below, the supports for the videoboard have hinges at the base. If, say Texas or Iowa gets too close to Iowa State’s end zone, the videoboard’s going to swing down and obliterate anything underneath it. Obviously the defense is going to have to be pretty quick getting to the sideline to avoid getting squashed, but Wally Burnham has been working on special shuttle drills to get the team off the field in time. 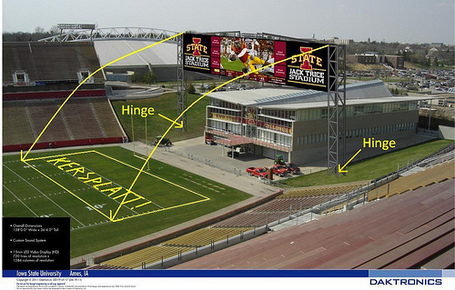 This is an unconventional and somewhat controversial strategy to be sure, and Iowa State may end up facing several lawsuits from grieving parents. But it’s like the old saying goes; if you can’t beat ‘em, smash ‘em with a giant plasma screen TV.