Don Hoiberg Makes the NBA an Offer it Can’t Refuse

Share All sharing options for: Don Hoiberg Makes the NBA an Offer it Can’t Refuse 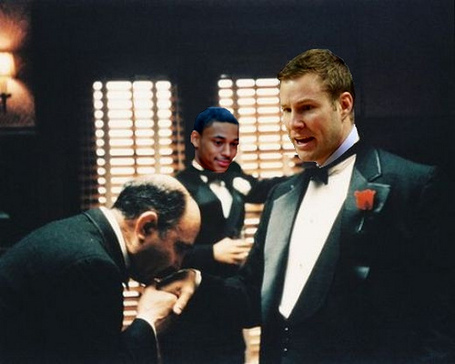 ***Interior of Iowa State basketball operations offices. Fred Hoiberg
and David Stern sit across a desk from one another***

NBA, we've known each other many years. I played in your league for ten years, I worked in your front offices for four. How can it be that this is the first time you ever came to me for counsel or for help? I can't remember the last time that you invited me to your house for a cup of coffee, even though I’m one of the greatest three-point specialists ever to play the game.

But now you come to me, and you say: "Don Hoiberg, tell us who to draft this year." But you don't ask with respect. You don't offer friendship. You don't even think to call me Godfather. Instead, you come into my house on the eve of the NBA draft, and you ask me how to proceed.

NBA, NBA., what have I ever done to make you treat me so disrespectfully? If you'd come to me in friendship, then you would know who the Lakers should draft in the second round. I have a player on my team by the name of Diante Garrett. An honorable man, he made it through the fiammeggiante disastro of the McDermott era unscathed. A guard of uncommon quickness, this signore has all the tools needed to succeed in the NBA. What, do you think 6’5" point guards  with 6’9" wingspans grow on trees? I can assure you that they do not.

This is a player that has flourished under my tutelage. Diante averaged 8.4 points and 4.3 assists per game in three years of coaching from the bastardo Greg McDermott. Once I was able to, uh, convince Creighton to do Cyclone nation a favor and save McDermott from the angry mob amassing at his doorstep, Garrett was able to showcase the full range of his abilities. NBA, Diante averaged 17.3 points and 6.1 assists while averaging 36 minutes a game in the Big XII. This is a good basketball player.

I can see by your expression that you are intrigued. Good. I will give you Diante Garrett’s contact information, and tomorrow some lucky team will draft him in the second round. Someday, and that day may never come, I'll call upon you to do a service for me. But until that day – accept the gift of this information on the eve of the draft.

Give this news to, uhh, Abdelmassih. I want reliable people, people who aren't going to be carried away when recruiting new players. Four star talent only from now on. After all, we're not murderers. At least not until we enter Big XII play next year.