Share All sharing options for: Countdown to Kickoff: Day 51 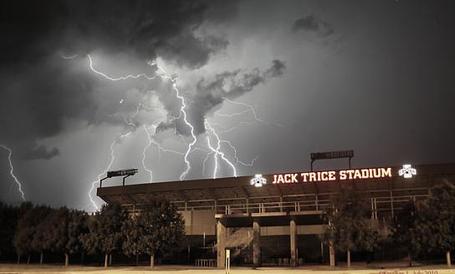 There are now 51 days left until Iowa State kicks off the 2011 season against Northern Iowa at Jack Trice Stadium September 3rd. 51 also happens to be the number of victories Iowa State has racked up in football in the last decade.  That's right, from 2001 - 2011, the Cyclones have averaged 5.1 wins in football per year.

Dan McCarney was 34-40 in that span. 2001 was McCarney's seventh year in Ames, and he was riding high after coaching ISU to a 9-3 record & their first bowl victory in school history in 2000. However, the next six years of his tenure proved mediocre at best. The Seneca Wallace years of '01 & '02 were followed by the debacle of the '03 season, where ISU was outscored by an average of 26.9 points in ten losses, and a rotating platoon of three quarterbacks was sent out to get killed behind a Marty Fine coached offensive line. McCarney & the Cyclones rebounded nicely in '04 & '05, winning a bowl game and sharing the Big XII North title in 2004. But after a disappointing season in '06, McCarney resigned; ending his tenure as the winningest coach in Iowa State football history. His 34 victories in six years give McCarney a 67% share of Iowa State's wins over the past decade.

Gene Chizik took over in 2007. He managed to win five games in two seasons. He left for Auburn. Next.

Paul Rhoads arrived in 2009, and injected some life into a program that desperately needed it. After the struggles of the previous three years, his pronouncement that Iowa State was going to win a bowl game the following season sounded insane to a lot of fans. But after grinding out six tough wins over the course of the season with a young team, Rhoads made good on his promise by beating Minnesota in the Insight Bowl. In 2010, the Cyclones were probably a better team than in 2009, but took a step back record-wise; going 5-7 and missing a bowl game. Rhoads' 12 victories in two years make him responsible for 24% of last decade's wins.

While 51 victories in ten years sounds bad, it represents the best sustained success for the Cyclones since the 70's. From 1991-2001, Iowa State won 32 games; including McCarney's nine-win high in 2000 and Jim Walden's winless atrocity in 1994. From 1981-1991, Iowa State were agressively mediocre for the entire decade, never winning more than six games in a season and never winning less than three; totaling 44 victories. Even the 70's, the best decade for Iowa State in the modern football era, only saw the Cyclones total 58 victories (granted, teams only played 11-game seasons at that point).

But the main number to watch is 51. This year begins a new decade in Cyclone football. Paul Rhoads has managed to do more in the first two years as coach at Iowa State since Clay Stapleton in 1958. The talent level isn't up to par with the rest of the Big XII yet, and the schedule is brutal again, but this team IS getting better. It remains to be seen how much better they can be in the next ten years.