Share All sharing options for: Countdown to Kickoff: Day 50 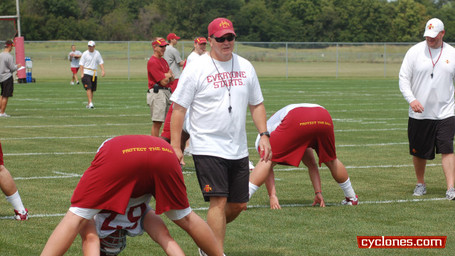 Winning the turnover margin. For a team like the Cyclones, who are at a talent disadvantage in the Big XII; it's a necessity. It's a philosophy that Paul Rhoads has tried to instill in the Cyclones. The team has "protect the ball" written on their practice shorts, for god's sake.

It's also something that they didn't do particularly well in 2010. Iowa State averaged 1.6 takeaways per game and 1.5 giveaways per game last year, good for a ranking of 50th in the country in turnover margin, tied with Western Michigan. This is a completely average number, but a number that Iowa State needs to improve in 2011. If a team is already in the bottom third of the country in all major offensive & defensive categories, as ISU was last year; that team is going to need to rely on turnovers to win games.

In their five wins last season, Iowa State won the turnover margin by a cumulative 16 takeaways to five giveaways. In their seven losses, the Cyclones lost the turnover margin with 12 giveaways to seven takeaways. Take the Missouri game last year. Iowa State only had one fumble in that game, but it was a costly one. With the team down by a touchdown & on Missouri's 30-yard line, Jerome Tiller lost the ball while scrambling for a first down, killing any momentum the Cyclones had. On the defensive side, Blaine Gabbert threw a beautiful pass straight to a streaking Leonard Johnson on the sideline. (Gabbert seems to make a habit of these passes. Good luck in the NFL, buddy!) The ball bounces off Johnson's chest, no interception. The score was still 7-0 at that point. Johnson makes that interception, and suddenly the game is tied.

With the personnel Iowa State has on the defensive side of the ball, the bend-don't-break defense that Wally Burnham & Paul Rhoads employ is probably a good idea. Iowa State doesn't give up big plays, but forces teams to march down the field in small increments (or not so small increments, sometimes). With the defense on the field for a longer period of time, and the offense running more plays; there are more opportunities for Iowa State to recover a fumble or grab an interception. In 2010, Iowa State didn't force enough of those turnovers and missed a bowl game. With a tougher schedule in 2011, if ISU wants to go bowling again; they'll have to improve the turnover margin.