Share All sharing options for: Countdown to Kickoff: Day 49(er) 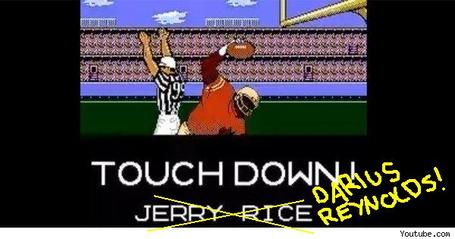 Was there ever an offense more unstoppable than the Super Tecmo Bowl 49ers? Sure, there were technically better teams in the game (like the Buffalo Bills); but if you wanted to light up the scoreboard you picked San Francisco every time. If you couldn't pass for over 400 yards with Joe Montana, Jerry Rice & John Taylor; then fuck you! You don't deserve to be playing this game!

Like Iowa State, the STB 49ers even had a quarterback controversy. Would a player choose steady, experienced Joe Montana (Jerome Tiller)? Or would they opt for younger, flashier, slightly more mobile Steve Young (Steele Jantz)? Truly a dilemma for the ages.

And the receivers, a group Paul Rhoads called "mediocre" in 2010, could definitely learn a thing or two from Jerry Rice, John Taylor and company. Throwing into triple coverage? No problem, Rice is going to come up with the ball. Unlike the Cyclone receivers of the past two years, who are lucky to even be in the vicinity of a thrown football, the STB 49ers wide receiving corps always goes out and makes the play. It doesn't matter where the ball is thrown, the virtual 49ers will jump ten feet in the air and GET IT.

And while Tom Herman is a smart guy and an experienced offensive coordinator, even the best football minds occasionally need a little outside assistance. With that in mind, Herman should plumb the vast depths of the Super Tecmo Bowl playbook and "borrow" some plays.

Maybe the problem with Iowa State's offense the past few years has been Herman outsmarting himself. Trimming the playbook down to a tidy eight plays should eliminate all confusion for the team. Want to gain crucial yards on a first down? Throw to a wide-open Kurt Hammerschmidt in the Pro T Flare D formation. Need to stretch the defense? Why not a long pass out of the Shotgun Z S In?

Simply put, outside of a few games (Texas, Texas Tech), Iowa State's offense has been stagnant for the past two years, and the defense simply can't survive when the offense is consistently going three-and-out and giving the other team a short field. With a simplified playbook and the right A-button-B-button combination, the Cyclones should easily eclipse 700 yards of offense per game in 2011. Easy.