Share All sharing options for: Countdown to Kickoff: 46 Ties 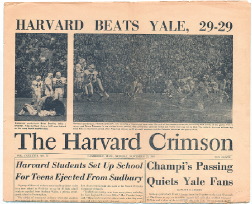 *-Eddy Erdelatz, describing a tie between Duke and Navy.

Since 1892, teams playing under the Cardinal and Gold banner of Iowa State have played in 1,102 football games. 46 of those games have ended in ties.

Thanks to a rule change prior to the 2006 season, ties are no longer a problem in college football. But once upon a time, ties ran rampant. (Okay, maybe not "rampant" so much as "something that happened about 5% of the time." Still, sometimes even a carefully calculated tie could have national title implications, such as in 1966.)

Actually, here's a pretty good rundown of the 10 best ties of all time. Worth reading if only to see Notre Dame flopping like a french soccer player in order to secure a tie with Iowa. Any other games I talked about would probably just be from that list anyway.

In 1990, Iowa State battled Kansas to a 34-34 tie in Ames. This was Kansas' record-shattering 57th tie of all-time, ensuring that Iowa State would somehow find it's way onto the wikipedia page for "Tie (draw)." This was also the highest score Iowa State earned in any of their ties.

Those 46 ties by the numbers, after the jump:

Most Ties against ISU (Big 8)

A couple things jumped out at me when I tallied these up. First was "Hey, these only add up to 45! What gives?" Yeah, the college football stats database I used didn't have results for Iowa State's very first year when they went 1-0-1. Google didn't seem to help either. Such are the mysteries of the game. It's also interesting to see who all made that list, especially all of the local Iowa colleges. And our supposed trophy game with Mizzou suddenly raises questions like: "Who got the telephone trophy when there was a tie?" "(And for that matter, has anyone ever actually seen this trophy? I'm still not convinced it exists.)

Least Satisfying Revenge: 1924, the year after Jack Trice was killed after injuries sustained against Minnesota, Iowa State battled the Golden Gophers to a 7-7 tie in Ames.