Share All sharing options for: Countdown to Kickoff: Matt Tau'fo'ou, #45 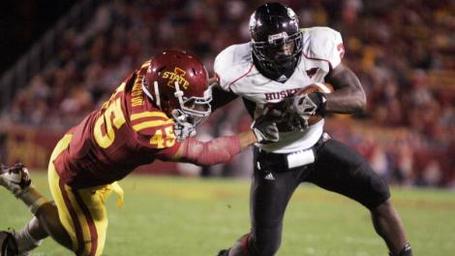 After a rocky first two seasons in Ames, Matt Tau'fo'ou will hopefully find his niche this season. It hasn't been an easy start for Tau'fo'ou. Seriously, google Matt Tau'fo'ou. Six of the top ten results deal with a) the broken leg he suffered last year against Iowa or b) his DUI arrest last January.

A junior college All-American at the College of San Mateo, Matt Tau'fo'ou was a late addition to Paul Rhoads '09 recruiting class. Expected to help shore up a weak linebacker group, Tau'fo'ou redshirted in 2009 due to shoulder problems before assuming a starting role in 2010. Tau'fo'ou played well in his first start, recording six tackles against a run-focused Northern Illinois team. Things were looking up for the ISU linebacking group, until EVERYTHING went to shit the next week against the Hawkeyes. Tau'fo'ou snapped fibula meant the thin ISU linebacking corps got even thinner for the next six games, as AJ Klein moved to middle linebacker and former walk-on Matt Morton assumed Klein's old spot at SAM.

Still, the linebacker position in 2011 has greater depth than it did in 2010. While Tau'fo'ou likely won't see the field until September 9th against Iowa (alcohol & cars, always a damning combination), his presence should provide an immediate upgrade at middle linebacker. While AJ Klein performed ably in his place last year, Tau'fo'ou needs to be on the field to allow the linebackers to perform up to expectations.

Better as a run-stopper than in pass-coverage, Tau'fo'ou's skill-set should come in handy in 2011 against running teams like Iowa, Texas A&M & Kansas State. Hopefully this is the year that Matt puts everything together, stays healthy and assumes his place as starter at middle linebacker.