Iowa State gets the Colbert Bump

Share All sharing options for: Iowa State gets the Colbert Bump

"Two time Iowa sportscaster of the year and voice of the Iowa State Cyclones, John Walters!"

This is something that was actually said on national television last night. The clip exists on the internet at this location, and the choice quote is about 45 seconds in. So how exactly did it happen? Why are the Iowa State Cyclones being name-dropped on a faux-conservative themed political comedy show? It's funny you should ask.

It has to do with the other big event going on in Ames, Iowa right now. (This is not a political blog, it is an Iowa State blog, and please remember as such when commenting.) The Ames, Iowa G.O.P. Straw Poll is a possibly meaningless and possibly not-so meaningless precursor to the Iowa caucuses. It doesn't really mean anything per se, but they've got deep fried butter and Randy Travis, and what else are you going to do on a Saturday in Ames before football starts?.

But because it's the only political event occurring at the time, a whole bunch of national news organizations cover it. In a way, it's the NFL Pre-Season of political coverage. And because they are reporting on location, Hilton Coliseum somehow ends up in the background of a clip on the Daily Show. 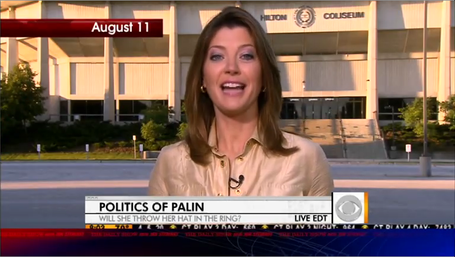 Now the trick to doing a good on-location shoot is to try and find the most professional looking building available, and stand in front of it while talking to try and give some gravitas to whatever you're reporting on. The benefit of which is that we get a bunch of Iowa State landmarks in the background of national news shows. ABC went with this old classic, camping out on central campus to get historic Beardshear Hall in the background:

Sadly, it also created this odd situation: I'm watching candidate Tim Pawlenty announce that he is ending his presidential campaign, and all I could think about is "Hey, I'm pretty sure that tree behind him is the one I threw up in after a win over Nebraska."

Alright, next up we have Fox News, who decided to go with the football theme. We can clearly see a row of brightly colored tailgate tents leading up to Jack Trice Stadium, and a nice shot of the back of the new scoreboard: 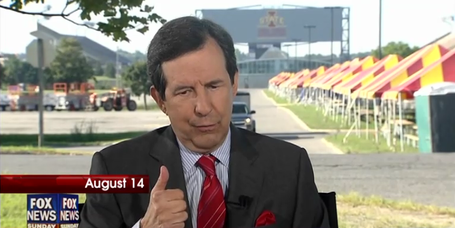 That thing just looks huge. I can't wait to finally see it in action. I believe this is also the first time the Iowa State Logo has ever appeared on the Daily Show.

Anyway, so a couple months back, faux-conservative political comedian Stephen Colbert tried to shed a spotlight on the ridiculous amounts of money and influence wielded by SuperPACs - so he attempted to create his own. And because the FEC had to take into account the previous rulings that some of the more ridiculous SuperPACs that have been formed, Stephen Colbert got his superPAC and free reign to troll the shit out of presidential elections on national television.

You see, SuperPACs are allowed to run whatever ads they want, so long as they claim to not be affiliated with a certain candidate. Colbert's ads are satire that aim to support Texas Gov. Rick Perry for president, but since he was a write-in candidate at the Ames Straw Poll, Colbert urged voters to write in "Rick Parry", with an "A for America... an A for IowA." One also contains the phrase "Cheap Cornography" and footage of butter melting over an ear of sweet corn to sultry music.

Anyway, so station brass at WOI-5 TV in Des Moines declined to play them because they thought that the ads would be confusing to voters. And Stephen may have taken it a bit hard and gotten angry. He implied they had a single digit viewership and rubbed his emmy in their face. But he made sure to make it clear he was angry at the management, and not the great news team. And that perhaps the intrepid news team at WOI-5 could investigate the matter, since they reported on the ads even though WOI declined to air them.

"Confusing to Iowa voters? Really? We're not talking about the dipsh*ts over in Nebraska."

Several days and a manufactured scandal later ("Perry-with-an-A-Gate"), the WOI team 'comes on' to the Colbert Report to talk about their findings, and in introducing John Walters, he name-drops ISU. And that's how a series of seemingly random events colludes to end up with the Iowa State Cyclones getting the Colbert Bump.