Share All sharing options for: The New Cy-Hawk Trophy is REALLY Bad.

So by now most of you have probably heard that the new and improved Cy-Hawk trophy is bad. Really bad. We're talking "made fun of on most national college football blogs" bad. And the rumors are all 100% true. The new trophy is a goddamn travesty. So just to revel in the misery a little more, lets take a look at how bad it will be. Lets really inspect this thing and get a good look at it, because who knows how long we're going to have to "covet" it. First up, the top piece: 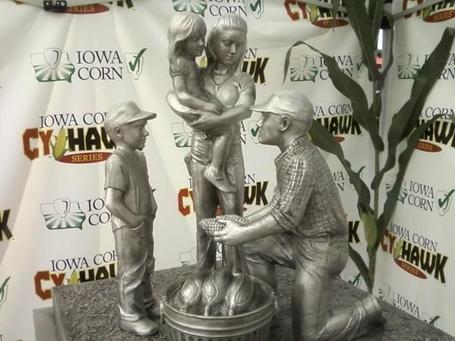 ...Are you fucking kidding me?

It's like the sort of trophy you'd get if you told someone to make a Iowa themed sculpture and purposely omitted the fact that it was going to be for a football rivalry.

It is at this point that I need to direct you to the good folks at EDSBS, because they have already mocked the everloving crap out of it. It's worth your time.

I love the history of my home state, and I'm proud that farmers literally do feed the world. But we need to get over this obsession with the small family farmer who rarely exists anymore. If you were to take this part off the trophy, you could slip it into the middle of your grandmother's Isabel Bloom collection and she wouldn't notice for years. Hell, most of the players who will be playing for this trophy are from Texas and Florida and have absolutely no affiliation to this myth of the Iowa farmer.

Alright, so that's pretty bad. How about the rest of it? What does the rest of this monstrosity look like? 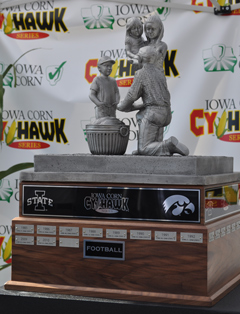 A block of wood with a plaque with the two logos and a little corporate feces smeared in the middle? I think we all expected that. I'm not sure anyone expected them to put all of the previous results since 1977 on there as if we had always been playing for this thing. And puzzlingly, the word "FOOTBALL" on a smaller off-center plaque just in case you had no idea what this trophy was for. (And based on the rest of it, you probably wouldn't have known.) Maybe Iowa State can change their logo again in a few years and they'll have to change the trophy.

It's such a bad trophy, in fact, that it's the perfect trophy for the information age. Within hours of it being revealed, my facebook feed was absolutely flooded with unhappy Iowans complaining about the new design. Soon, stories were running on national college football blogs: EDSBS spends a few minutes mocking the thing to Omaha and back (Seriously, check out that link, it's hilarious), ESPN's CFB blog picked up the story, SportsGrid got in on the mockery,Dr. Saturday got in on the action, it made the main page here at SBNation, CBS Sportsline's "Eye on College Football" blog picked it up (although to be fair one it's written by one of the guys over at Black Heart Gold Pants who may have ultimately said it best):

Surely it can't be worse than the old one, right?

Turns out, it can be. In fact, this might be the only time Iowa State and Iowa fans will ever be in 100% agreement on something, apart from "Minnesota sucks."