We've been had, people.

The realization first dawned on me when the traffic for Clone Chronicles spiked to over 2,000 visitors last Friday, something that at the time I dismissed as an anomaly. With the press conference last Tuesday, however, I'm almost convinced that this whole trophy business has been a long con, perpetrated by the Universities and the Iowa Corn Growers Association. As a long time denizen of the internet, I salute them in what can only be described as a masterful job of trolling.

To appreciate the full scope of this thing, lets turn the clocks back to July, when it was announced that the old trophy would be retired. Most people thought this was a wise move - after all, the old Cy-Hawk trophy really does look like something that someone would have cobbled together in a high school shop class. (With all due respect to co-creator Bob Uetz, without whom this rivalry may never have gotten back off the ground.) Almost everyone in the state of Iowa who followed college football disliked the original design, and almost nobody outside of the state of Iowa even knew the damn thing existed.

Now most people figured that the ICGA would just churn out some sort of corn-themed football trophy, slap a logo on it somewhere, and call it a day. What they surely didn't expect is for the ICGA to hold an unveiling ceremony three weeks before the game and unveil what is arguably the worst rivalry trophy in all of sports. And to stand next to University officials, completely straight-faced, and feign pride in the damn thing?

It was a genius move.

Before the unveiling cloth had hit the ground at the state fair, the college football obsessed superfans that hang on every tweet and scrap of information had picked up pictures of the new trophy and were flinging them to the far corners of the internet to be mocked and ridiculed. Not long after, sports news sites like ESPN and CBS picked up the story. Next thing you know, the universal panning of the trophy has become an Associated Press piece, and the Cy-Hawk rivalry is suddenly getting exposure in place like the Washington Post and the New York Times.

It was the perfect trophy for the information age. And as a result, it generated a LOT of publicity for the Universities, the Iowa/ISU football game, and the ICGA.

"But CyHawk!" you say. "Surely, this can't all be a conspiracy! Why would any company subject themselves to such bad publicity?" Allow me to adjust my tinfoil hat and lay out a different scenario.


Let's say that the ICGA had put together some sort of boring (but predictable) trophy, like a bronzed corn stalk, or a football peeking out of a corn husk. Iowans probably react with mixed reviews, a few non-Iowans take potshots at just how "corny" Iowa is, and everybody moves on with their lives. Almost everyone who gave a damn about this trophy in the first place had some sort of an idea as to what they wanted it to look like, and the trophy was likely to get mixed reviews anyway, because it's almost impossible to get a majority of football fans to agree on something apart from "Beer is Good." So some people like the trophy, some people hate it, most are indifferent to some degree. The ICGA gets minimal exposure for their investment in the rivalry, and the game fails to recieve any sort of national attention.

It's not like they couldn't have known. Are you telling me that both people from the Universities AND people from the ICGA looked at the replacement trophy and said "Yeah, that seems about right to me." I know it's a business and all, but I guarantee you that there were at least a few people working on or near this trophy who care very deeply about college football in the state of Iowa. In the days of focus groups and carefully constructed corporate images, there is absolutely no way that this trophy should have seen the light of day.

And yet, last Friday, the new trophy was unveiled upon the Iowa State Fair without even a hint of irony or self-awareness. Unless Michael Scott is secretly running the ICGA, there is no rational explanation for what was unveiled - unless it was all part of the original plan.

As the weekend goes on, high-profile Iowans weigh in on the situation. Hayden Fry comes out against it. So does Gov. Branstad. In fact, it was hard to find any Iowan who didn't have some sort of negative remark about the new design. Cyclones and Hawkeyes alike have found the one subject they can agree on. "The new trophy sucks."

I currently live in South Carolina, deep in the heart of SEC country. People I work with routinely confuse the "Iowa Cyclones" with the "Iowa State Hawkeyes" when discussing college football with me. They've never heard of Jack Trice or Nile Kinnick. Some mistakenly believe that Iowa State is in the Big 10.

But every single one of them was asking me about the new trophy on Monday morning.

On Tuesday, the ICGA and a couple University officials had a press conference to announce that the reaction to the trophy had been overwhelmingly negative, and that they would be scrapping the new trophy design and taking submissions for the new trophy from the public. This did three main things, all of them good:

1) It kept the national exposure going, as news outlets ran follow-up pieces on the scrapping of the trophy. Observe this "articles about subject" graph taken from the sidebar of a Google News search for "Cy-Hawk Trophy" and bask in that follow-up story wave: 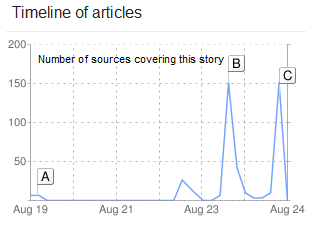 2) It made the public feel like they had a stake in the situation, and leveraged the national exposure gained to solicit even more good ideas for the new trophy.

3) It allowed a football consuming public (that was already tired of things like "Leaders and Legends" and "The Heroes Game" being defended by corporate bureaucrats) to see a contrite and apologetic ICGA, who was now willing to listen to the public's input. (Thus causing the company who is going to be sponsoring the game to be viewed in a more favorable light.)

Hanlon's Razor states that you should "Never attribute to malice what can be attributed to stupidity." And maybe it applies in this case. But I ask you which is more likely: That a company who signed up to sponsor a college football game, one that they knew was important to a majority of their customers (and probably more than a few of their employees) could miss the mark by so much? Or is it just possible that a small company (with limited, regional exposure) and a couple of state-sponsored University faculty members were able to find a way to leverage the power of the Internet, social media, and our universal need as a culture to mock things in order to generate a couple weeks worth of minor national exposure leading up to the game?

(And for the record, I'm really sorry about the corn pun in the headline. I'm tired of 'em too.)