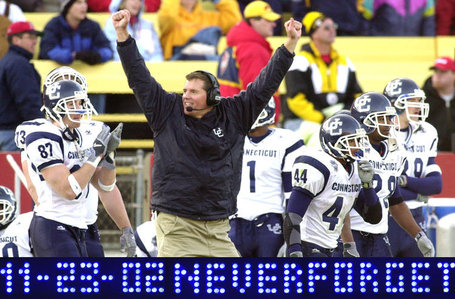 It was the perfect ending to the perfect meltdown. Once ranked as high as #9 in the country, a listless Iowa State team was getting pushed around by Division 1-A newcomer Connecticut. Having just finished their two year transitional period, the Huskies managed to post a 6-6 season with the final victory. The official crowd was listed as 34,582, but few remained in the stands as the 4th quarter ran down. The 37-20 win was UConn's first win over a BCS conference school (and bowl-bound team) and would help legitimize their Big East inclusion two years later. Iowa State would be invited by the Humanitarian Bowl out to Boise to get stomped by a Boise State team that was just starting their current rise to prominence.

It's hard to call this a revenge game, because most of the players who will be playing in it were in grade school when Randy Edsall brought his scrappy UConn Huskies into Jack Trice Stadium and got the first real signature win of his career over Iowa State. I've been told I was at the game, but recollections are hazy due to the copious amounts of alcohol that were ingested by necessity to make this game bearable.

If you were to use the create-a-school feature in an NCAA Football video game and set the difficulty to a moderately hard setting, the result would probably look a lot like UConn's football program. Having only been a full Division 1-A school since 2002, the Huskies were invited into the Big East after going 6-6 and 9-3 through their first two years, and promptly played in and won their first bowl game in 2004. The team struggled in '05 and '06, but regrouped to tie for first in the Big East in 2007, a season that saw their first win over a ranked program (#11 South Florida.) and their first appearance in the top 25. In 2009, Edsall got another signature win over Notre Dame in a South Bend 2OT thriller, and then in 2010, it all came together and the Huskies won the Big East and a Fiesta Bowl berth, where they were quickly dominated by Oklahoma.

Edsall used the Fiesta Bowl run to secure himself the head job at Maryland, and now nobody is really sure what to make of this year's Huskie team. They predictably stomped their first week cupcake, but scored 21 points last week off two defensive TDs and two Field Goals in a 24-21 loss to Vanderbilt. Their offense was almost non-existent for much of this game, similar to Iowa State's offense during the first three quarters of the UNI game. Still, to overlook this team after a huge win and a short week would be a terrible mistake.

The UConn offense will be led by "JOHNNY MAC, TRICK SHOT QUARTERBACK." Apparently this dude was a youtube micro-celebrity for the following video:

Bam. Revel in the glory of "Eric B is president" and appreciate how hard it is for student athletes to find ways to stay out of trouble. If you watch it past the halfway point, it also counts as a kicking game preview.

Here's what you really need to know about the game:

It's on Friday night at 7:00 CST, and it's almost guaranteed to be on a channel that you have. Depending on area, it will be on ESPN or ESPN2, and will be simulcast on ESPN3 if you have access to that. Us and Boise State-Toledo are the only games on TV, so we'll have a decent national audience watching depending on how bad Toledo gets blown out. A win would do wonders for the arguments for keeping the Cyclones in a BCS conference.

It should also be a game that looks pretty badass on TV. UConn has decided that they will be continuing the trend of solid color themed crowds and has instigated a BLUE OUT to take place on national television. Iowa State, on the other hand, will be countering with their alternate road uniforms, a white jersey/white pants combo. University officials are still denying the existence of a fabled "white helmet" and is insisting that the players will be wearing their normal cardinal helmets for the game. Of course, there are skeptics who believe the white helmets are coming anyway.

Regardless, Iowa State has a chance to go 3-0 for the first time in a long time, and get themselves into a much needed Bye week before Texas comes to town. Steele Jantz has shown that he shines when the lights are brightest. What havok will he unleash on a national stage? Will Iowa State's white helmets mysteriously emerge much as the gold jerseys did last year? Will UConn realize why using steel in the background of their blue out promotion is ironic? No idea. Will the combination of these two things look awesome as a backdrop for the Steele Jantz show? Hell yes. 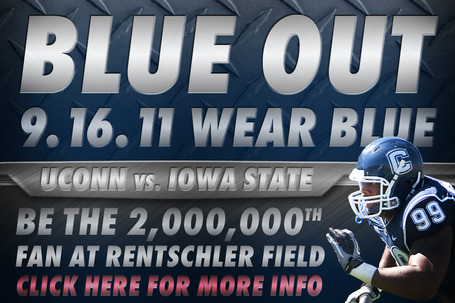 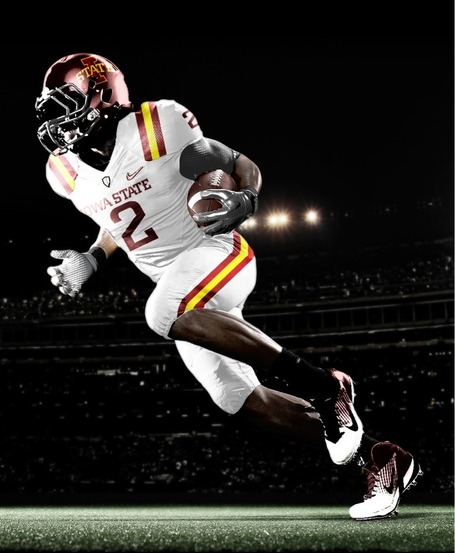