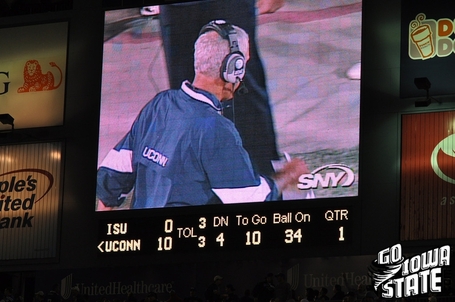 To combat this, Iowa State will try the unconventional strategy of starting the remainder of their games this year in the second quarter. Instead of struggling through the first quarter and risking injury or a potential pick-six on an inevitable Jantz interception, ISU will instead play only 45 minutes of football starting in the second quarter.

"We're also planning on spotting the other team ten points," said head coach Paul Rhoads in an official statement. "At this point it just seems like the best thing to do. We're trying to put the most entertaining team on the field for our fans, and we've received a great response after our three comeback wins so far."

The statement released by the Iowa State athletic department this week spelled out the football team's plan in more detail. "Look, we don't have an exceptionally explosive offense this year, but we have some playmakers," continued offensive coordinator Tom Herman. "After studying the film from the first three games, it came to my attention that (Steele) Jantz plays best under pressure. He'll leave you scratching your head in the first quarter, but if you need a 3rd and long or 4th down conversion, you bet your ass Steele's going to make a play.

While most of the Iowa State coaching staff expressed support for starting games in the second quarter, defensive coordinator Wally Burnham has his doubts. "Look goddammit, I'm old-fashioned," Burnham said. "I've been in the coaching game for 40 goddamn years, and I've never heard of anything so harebrained. Who ever heard of only playing 45 minutes of college football, let alone giving the other goddamn team a ten-point lead to start the game?"

Indeed, it's believed that this is the first time a football team at any level has intentionally forfeited 15 minutes and ten points to their opponent. In fact, it's still unknown if this change will even conform to NCAA regulations. Nevertheless, the Cyclones plan on implementing the second-quarter-strategy for their game against Texas this week. Tune in at 6:00 PM Central time on FX to see if it has the desired effect.